This documentatin is now deprecated. If you are using Matchmaker Self Serve though UDash contact us directly to get access to the new documentation

Multiplay provides a quality of service (QoS) protocol to dynamically determine the available regions in which a client would expect to get the best connection quality for their online session. This document provides an overview of the QoS protocol components, how to use each component, and the best practices to consider when writing a custom implementation of the client.

The QoS protocol is comprised of two main components: Discovery and QoS.

This document assumes familiarity with terms and concepts outlined by Multiplay, such as fleets, locations, and regions. For more information, see https://docs.multiplay.com/.

The Discovery service provides a way for the client to determine at runtime the regions that are currently available to host or join an online session. It performs this action by providing a REST endpoint to query for currently available QoS servers for a given Multiplay fleet.

The request endpoint supports a GET request at the following URLs:

[fleet_id] is replaced with the actual fleet ID that is provided by Multiplay for your title. The request body is empty.

The possible HTTP response types from the request are listed in the following sections.

The request was successful, but the generated ETag did not match the value in the If-None-Match header.

Each server in the array contains the following properties:

Each server includes an IPv4 address, an IPv6 address, or both types of addresses. The port is the same for either IP version. If a server does not have a particular IP version, it is represented by an empty string, which is shown the following example:

The request was successful, and the generated or cached ETag matches the If-None-Match header. See the ETag support documentation.

The request was not authenticated.

The given fleet_id does not exist.

The response contains the following properties:

The following code snippet shows an example of a 404 Not Found error.

A server-side error has occurred.

A successful (2xx) Discovery service response includes a standard HTTP entity tag in the ETag response header. If this tag is provided in a subsequent request in the If-None-Match header, and there are no changes, the server responds with HTTP status 304 (not modified) and an empty body. This indicates that the list has not changed since the last request. In this scenario, you should use the previously cached results on the client.

Use the QoS server to determine connection quality to a specific dedicated server region. Connection quality is defined as a combination of network latency and packet loss. The QoS server works with a very simple UDP protocol. Developers define almost all of the data that is included with the request, and the response includes an exact copy of the data that is sent. For example, you can include timestamps, sequence counters, and unique identifiers in the request with the goal of computing latency, packet loss, and detecting duplicate packets on the response.

You can also directly send the QoS request to a QoS server that is identified by the Discovery service at the provided IP address and port.

There is currently no authentication that is required for sending QoS request packets. Sending any valid request should generate a response, assuming that the server has capacity, that the client is not banned, and that the request or response is not lost in transit.

The QoS Request packet is sent from the client to the QoS server. The payload (after the IP and UDP headers) is defined as shown in the following example:

Note that the payload (not including the IP and UDP headers) cannot exceed 1500 bytes. For more information on packet sizes, see QoS best practices.

The following example shows how a developer might use the custom data1:

A developer can either use this example format for their custom data, or can use some other custom format. Another option is to pad the packet out to a larger size to prefer servers on routes that do not discard large UDP packets if the game requires them, being mindful of the 1500 byte limit.

The payload (not including the IP and UDP headers) is between 2 and 1500 bytes.

Flow control is defined as instructions from the server to the client to voluntarily back-off from sending requests, or to inform the client that they have temporarily been restricted from receiving responses.

The QoS protocol was designed to never require the developer to manage the byte order of data. Header data is all byte-based, and custom data is echoed in the same byte-order in which it was sent. Accordingly, instead of flow control using a potentially multi-byte value for the amount of time to back-off, the contract is that each unit of flow control represents 2 minutes of time, and the server indicates how many units to apply. The client should pad this amount with a reasonable buffer of time (for example, 15-30 seconds) to account for latency and processing time on the server.

During a ban, all QoS requests from the banned client go unanswered. The ban could be enforced because the server thinks the client is sending too many packets in a short amount of time (see QoS best practices), or because the server has exceeded capacity and is enforcing an algorithm to reduce usage to get back under capacity. In this scenario, the client was chosen at random to be turned away for a time. Note that the ban is server-specific, and being temporarily banned from one QoS server does not prevent the client from contacting other QoS servers.

To compute latency, include a timestamp in your request packets, and then read that timestamp in each response packet and compare it against the current time. The difference is the computed latency.

To identify duplicate reponses, include a unique value (for example, a sequence byte) in each of your request packets. When recording responses, check the unique values against those that are used in the requests. If a response contains a sequence that has already been accounted for, it is a duplicate and can be discarded without counting against the response totals or latency. 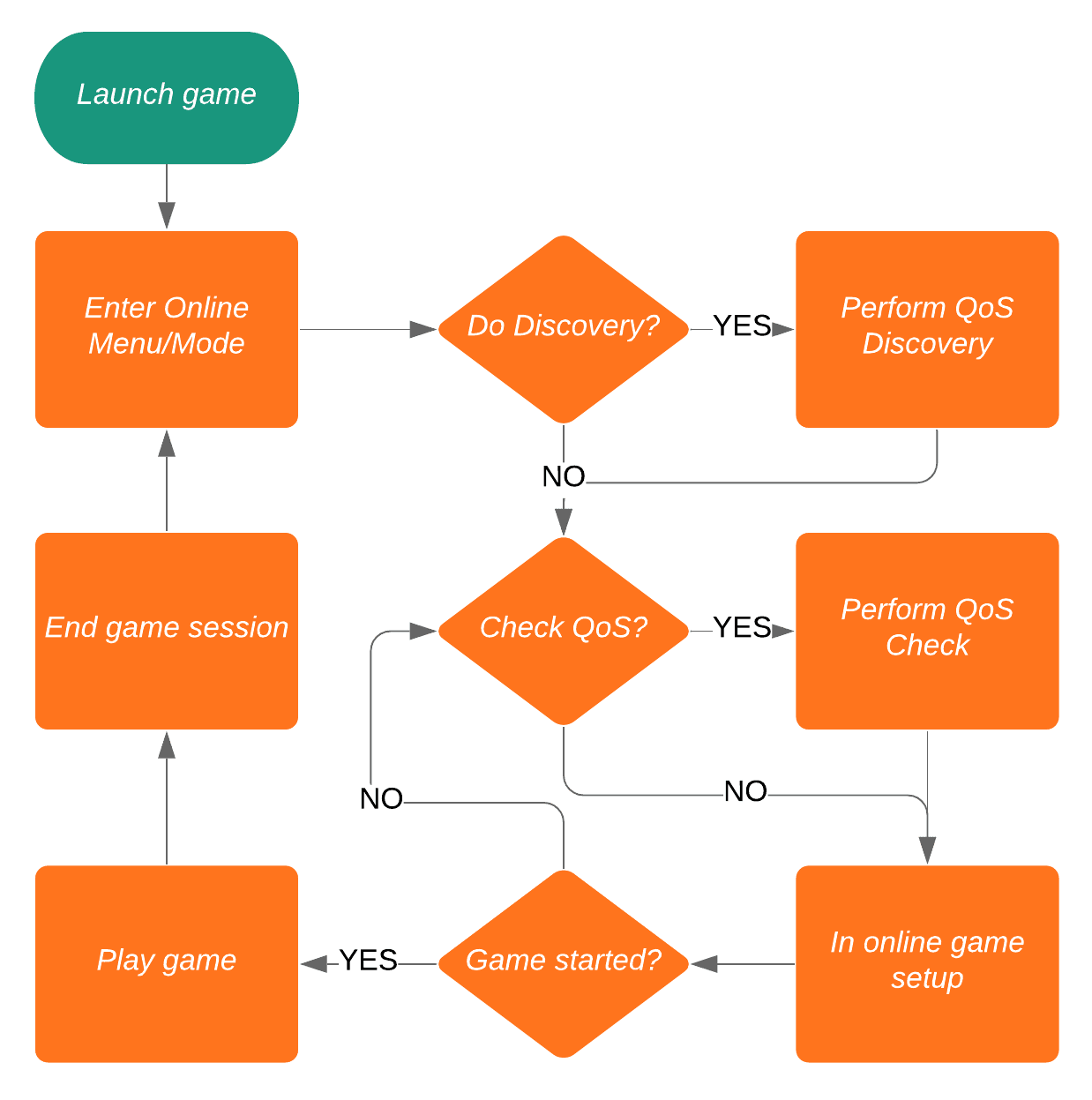 The flow starts discovery as soon as the player progresses to the online menu or mode after they start the game (or any time after the network stack has been initialized). After discovery is performed, a QoS check is then performed. When in the online game setup, QoS is rechecked periodically if enough time has elapsed since the last check. The QoS results are used in the online game setup to determine which regions to attempt to create or join a game. If using the Multiplay matchmaking service with Multiplay dedicated hosting, the QoS results can be attached to the matchmaking ticket, and the developer configured matchmaking logic will make decisions for the player based on those results. For more information, see the Matchmaker beta user guide.

When the game is over and the player re-enters the online menu or mode, QoS discovery can be skipped because it was already performed, and the flow can continue directly to checking QoS. If a developer chooses to check Discovery again instead of proceeding directly to QoS (after the recommended interval of time has passed since the last Discovery check), they should use the provided ETag from the previous check.